The Saab JAS 39 Gripen is a lightweight multirole fighter manufactured by Saab, the Swedish aerospace company. The single-engine Gripen features delta wings and canards, and fly-by-wire technology. The aircraft has the capacity to carry out fighter, attack, and reconnaissance missions.

Switzerland intends to purchase the Gripen fighter. Pilots and flight test engineers from Swiss air force and Armasuisse procurement agency have test flown the Gripen at Saab’s facility at Linköping in Sweden. 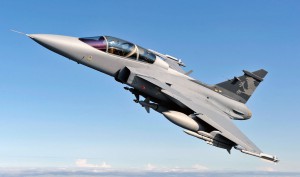 The Saab Gripen in flight.

Bernhard Berset, Armasuisse chief test pilot, said, “We performed flight performance tests using an air policing scenario. We simulated a quick reaction alert and a maximum performance intercept to high altitude and supersonic speed. We tested the [General Electric F414G] engine in the entire envelope and are pleased with the results.”

During the testing, the aircraft was flown with a wide range of weapon configurations, including the carriage of dummy Diehl BGT Defence IRIS-T, MBDA Meteor and Raytheon AIM-120 AMRAAM air-to-air missiles. The test flights were carried out up to an altitude of 12,000ft (3,660m) and to a maximum speed of Mach 1.35.

Richard Ljungberg, Saab chief test pilot, said, “We have shown the growing capabilities of this aircraft and demonstrated everything requested, including increased performance, handling and endurance.”

Switzerland plans to use the Gripen to replace its Northrop F-5E/F fighters.

Following this successful testing, Switzerland will order 22 aircraft. Deliveries of the Gripen will be between 2018 and 2020.

There are 163 Gripens in service in several countries, including Sweden, United Kingdom, Thailand, South Africa, Hungary and Czech Republic.