Developed by Boeing Commercial Airplanes, the 787 Dreamliner is one of the newer planes brought to the scenes. There are different versions of this twin-engine jet, wide-bodied design, which seat between 210 and 335 people. The whole point of the design was to replace the Boeing 767, which still remains in service to this day. 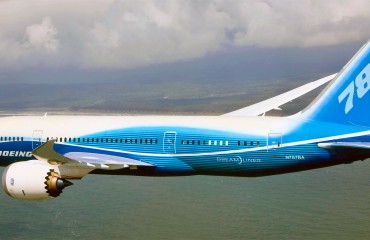 The Boeing 787 Dreamliner in flight

It quickly became known as the most fuel-efficient airliner in Boeing’s history, and continues to hold that title now. It was also the first major plane to have composite primary materials to create the airframe, and has chevrons along the engine nacelles to reduce the amount of noise heard from it.

Qualified pilots that fly the 777 will not have to do any extra training. The design was also done with pilots in mind, and uses very similar features.

Retiring the 767 From Service

The idea was that the Boeing 787 Dreamliner would replace the 767, allowing it to retire from service. However, that aircraft is still in use today, and still being manufactured. This is due to problems of onboard fires on the Dreamliner. The experts found that the lithium-ion batteries were causing the fires, along with other in-service issues arising.

It led to all Dreamliners being grounded in the USA from January 16, 2013 on orders from the FAA. The batteries were redesigned to avoid the issues, and by April 19, 2013 the FAA could reassess the situation. Just a week later, the grounding was lifted and the planes were back in the air. Ethiopian Airlines was the first to place its Dreamliner back in the air on April 27.

During all that, alternatives were needed. Since the 767 was the closest match, it made sense to keep that in service. There are hopes that the Boeing 767 can now be retired.

The Development of the Boeing 787 Dreamliner

The 747 was the first jetliner with the wide body that would enter into service. However, it was just two years after the development that a new one was being created. This was simply called 7X7 for the time being, and would replace one of the earlier narrow-body versions, the 707. It was clear that people wanted twin-aisle seating and more space. Room for more passengers was also a necessity.

Other considerations to make were an aircraft that would be able to take off and land on the shorter airstrips, while creating something for shorter distances. Unfortunately, the latter consideration was not a popular one. People wanted longer journeys on planes, which meant the creation of a transcontinental plane. 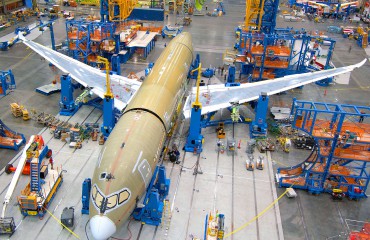 The new plane became the 767, and would be very similar to the Airbus A300. The plane was certainly popular, but two decades later a replacement craft was needed. The sales for the 747 and 767 had slowed down, as consumers and airline companies wanted something more efficient and fuel-friendly. Operating costs were a major factor in the amount of flights the companies could do.

Petroleum prices were on the rise, and the September 11, 2001 attacks caused disruptions for the airline market. Something needed to be done, and work on the designated 7E7 was started.This would be a twinjet, midsized aircraft. It would replace many different types of aircrafts, including the Sonic Cruiser, and the Yellowstone Project was started.

While focusing on efficiency, there was also a focus on lower costs. Instead of a lot of different aluminium sheets for the fuselage, one composite barrel would be used. It was the first of its kind.

As well as that, it would be 20 percent more efficient than the 767 that it was going to replace. From that, 40 percent of the efficiency would come from the engines, which would be powered by the Trent 1000 from Rolls Royce and the GEnx from General Electric.

Deciding on the Title Name

The Boeing 787 didn’t quite have the best ring to it, so a better name was requested. Boeing allowed the public to vote, with the names Global Cruiser, eLiner, Stratoclimber and Dreamliner being available. 500,000 people voted and Dreamliner was the clear winner.

Just shortly after that, All Nippon Airways of Japan became the first customers. 50 aircrafts were ordered on April 26, 2005,and the first deliveries would happen in 2008. There was a request for the different number of passengers that the planes could handle, with 20 that would seat between 210 and 250 and 30 planes that would seat between 290 and 330 people. With these new options, the Japanese airline would be able to offer flights to areas of the world that it had never done before. The sky really was the limit.

The Wind Tunnel Testing and More 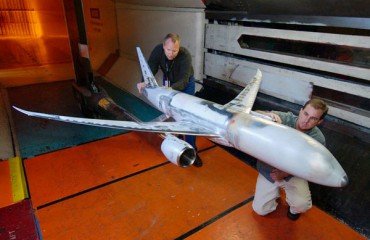 Wind tunnel testing was a necessity for the 787. It went through the five-meter tunnel at Farnborough, UK and the wind tunnel at NASA’s Ames Research Center. After that, ONERA was given the chance to test its capabilities. The testing helped to finalize some of the designs.

Initially, it was supposed to be a large, fancy aircraft that would be impressive to look at. However, it was styled down in the end, with conventional cockpit windows, nose and fin. All this seemed to have helped, as the number of orders reached 237 by the end of 2004. It certainly helped that Boeing initially priced its eighth version of the aircraft low at $120 million. That was later increased to between $157 million and $167 million. The 787-9 had a maximum valuation of $200 million.

Getting Outside Firms Involved

The delivery needed to happen as quickly as possible. While Boeing chose to build the aircrafts in less traditional methods with assemblies and subcontractors, there was another way of doing it. Using outside firms was a consideration, and Japanese companies became the first outside firms to gain key roles in the designing of the airliners. The companies would end up co-designing and building the wings, along with 35 percent of the rest of the aircraft. It made sense considering it would be a Japanese airline company getting the launch versions.

Using the outside help definitely helped with the creation timeframe. Final assembly took place in May 2007. However, that did lead to a loss for some of the subcontractors, such as Finmeccanica, which lost 750 million Euros in total by 2013.

The Process of Testing

Now all that was needed was the testing process. This could happen in stages, and it took just three months to get the certification from the US and European regulators for the Trent 1000 engine. The crash testing was then the next step, which took place on August 23 of that same year. The first physical test showed that the same things would happen as predicted, which meant that no more physical testing was required.

However, while this helped speed up the process of testing, there were critics out there that hated the idea. Some believed that the way the fuselage was created, there would be a toxic gas that would be created if the plane crashed and burned. This was never indicated on Boeing’s test data. Boeing proved that passengers would have just as good a chance of surviving a crash as on any other airliner, and met requirements set by the FAA.

It was seven months later that the GEnx engine was certified, and 10 months later that electrical systems were tested. Boeing created a static site for testing on September 27, 2008 to make it easier, safer and quicker for getting through all the testing necessities. By the end of 2008, the FAA decided the Dreamliner had passed its maintenance program.

Factory testing was then required, which started mid 2009. This was where some of the problems were noted. The range of gear swings and other components was about 10 percent less than promised, and the aircraft weighed in at eight percent more than expected. Redesigns were required, and the newer versions were created. There were delays in deliveries for some companies. 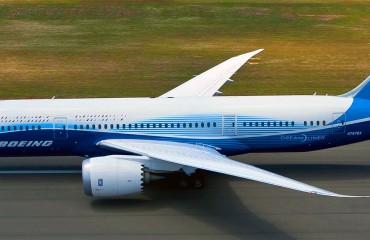 After all the testing and redesigns, Boeing decided that the first flight would be within a fortnight of the Paris Air Show on June 15, 2009. However, there was the need to reinforce the aircraft’s side-of-body section and that would lead to delays. The new 787 would be available from August 27, and the first flight would take place later. Only then could the deliveries start.

The first three Dreamliners ever created were deemed unsuitable for selling, and for testing only. That led to a $2.5 billion write-off for the manufacturing. A second production line was needed, and that was annouced on October 2009. It would be December before the last high-speed tests could take place, and only then could the first flight happen. Boeing did stick to the deadline of the end of 2009, though, with the first flight being on December 15, 2009. Bad weather did mean the flight was dropped from four hours to three. After that, further problems were discovered and it would be July 18, 2010 when the first international appearance would happy at the Farnborough Air Show.

Things never did quite go to plan for the Dreamliner. All Nippon Airways did eventually get the plane though, and made its first commercial flight on October 26, 2011. Only 140 have been built up until April 2014, but more are on the way.