Parts of the Earth saw a temporary communication blackout due to sun flares on April 24. The blackout only happened for a few hours, and was isolated to parts that were within the sun’s range at the time.

Scientists have confirmed that the eruption of the flare came from Region 2035. A sunspot reached its intensity peak, and it led to problems for communication devices around the areas that were in range. It did not cross into parts of the world that were not in range, and only affected people for two hours at the most. This was around 8:27pm PST on April 24. 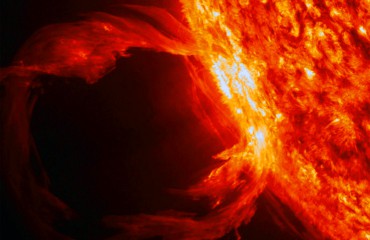 The US Space Weather Prediction Center updated people as soon as it could once alerted to the problem. The good news was that Region 2035 would be out of view after a while, and the danger would be limited to just the immediate future. It is unknown just how many people found out about this at the time considering the communications were down or spotty during this period.

This was considered an X-class flare, which is the most intense of all types of flares from the sun. The number after the X indicates the strength, with an X2 being double the strength as an IX. X3s are three times the strength. The one that hit the United States was an X1.4, so it was 1.4 times as strong as an IX flare.

Stronger flares have hit the Earth in the past. In August 2011, the most intense recorded was an X6.9 flare. There was one stronger in February this year, measuring X4.9. The experts believed that the sun had reached its peak last year, but have since been proven wrong. However, the flares are becoming less intense, which shows that the flares are dying down.

Solar flares are a process of the highly-stressed magnetic field lines reaching higher than the photosphere layer of the sun. When the magnetic field lines are pushed together, they accelerate and that creates hot ionized gas. This leads to the gasses being released from the sun and into space. It is possible for coronal mass ejections to happen. These are the magnetic fields and solar winds that can be extremely damaging depending on the intensities.

This leads to a sudden bright flash over the surface of the sun, and can release energy by as much as 6 x 1025 joules. That is just a sixth of the sun’s total energy output per second!

While flares happen often, they do not always lead to the mass ejections. This is when they can reach the Earth and cause havoc. The clouds that reach the Earth usually occur up to two days after the initial event on the sun.

Considering the sun is just a very big and bright star, it makes sense that stars are also capable of creating these types of flares. However, they are known as stellar flares, and are not usually as damaging or as major for the Earth. It all depends on the location of the star.

There is currently little understanding about why the solar flares happen. It is virtually impossible to get anything towards to sun to be able to measure something like this due to the intense heat that surrounds this star in the universe. Much of the research is based on the limited understanding of how the sun works and the magnetic fields within it.

The Intensity of the Coronal Mass Ejection on April 24

Those who are worried about the intensity of this last ejection can stop. The flare was not aimed straight at Earth, so the geomagnetic storm did not happen. There was also no aurora borealis that usually accompanies the storm, also referred to as the Northern Lights.

More good news is that the atmosphere of the Earth is designed to protect people from the radiation of the flares. There is little health risk, unless the flares are extremely high. This has never been known. The most damage that can happen is the communication disruption, which did happen. This is usually due to affecting the satellites that are in the low orbit of Earth, which is not as protected as the rest of the planet.

Due to the distance from the sun, there will never likely be a flare that affects the Earth with radiation. Of course, this is as long as the universe remains in the balance that it currently is.

Parts of the Earth Affected by the X-Class Solar Flare

Very few people were affected by the recent communications problem. Much of the Earth was facing away from the sun at the time, with just parts of the Eastern Pacific Rim facing it. Most of the intensity hit the Pacific Ocean, and satellites around there. In fact, much of the world was asleep at the time and would not have even noticed a problem.

The Space Weather Prediction Center reports that just the Eastern Pacific Rim and Pacific Ocean were affected. This only happened for up to two hours, as the Earth moved out of line. 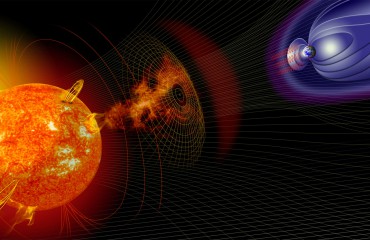 This was certainly not the first solar flare of 2014. In fact, there have been at least two X-class reported so far. The most powerful of those was on February 24, 2014. It hit the Earth at around 7:49pm PST, and was almost five times more powerful than the IX, at a 4.9 rating. This flare left a plasma knot in its wake.

March 29 saw another flare reach Earth. However, this was classed as just short of an X2 flare. This is still higher than the most recent flare to reach the planet, which supports the idea that the sun may have finally reached its peak, but it is certainly not stopping. Some people may have actually felt this second flare due to the geometric storm that hit the planet at the time. The storm continued for a few days after the event. Some of this was also due to a range of solar flares of different classes hitting the Earth shortly after this March 29 event.

However, scientists never expected the flares to cause any damage, even with the storms. The most likely thing to be affected was the lights in the north and south poles. These would likely be more intense compared to normal.

2011 still holds the record for the strongest flare since 2008. This was the first date of the 11-year cycle that the sun always goes through. The end of 2019/start of 2020 is expected to be the start of the next cycle. The good news for the Earth was that the August 8 flare was on the side of the sun that did not face the Earth. It meant limited damage, and just some technical blackouts. It could have been much worse, although would still not have penetrated the Earth’s atmosphere. The worst would have been the geometric storms.

The 2011 flare does not hold the largest record. In the previous cycle, 2006 saw a flare that was an X9 classification. Again, this was not directed towards the Earth, so very little danger occurred.

Blackouts in the Communications

It is possible to check the update of possible flares ahead of time, since the flares usually only hit a day or two after the actual sun flare takes place. This means that warning can be given for things like space explorations and activities. In January 2014, a rocket launch was suspended after an M-class flare was going to occur. It could have been dangerous for the astronauts and the rocket to be released at this time. Not only would it have meant the communication blackout while up there, it could also cause problems with radiation.

There was no storm with the temporary blackout in April. This was because of the direction of the flare, since it was not towards Earth.

The flares happen on a relatively regular basis, but there is always the chance to find out about them a day or two because they do come and cause havoc.