Garuda flies to many destinations in East Asia, Southeast Asia, Australia, Europe and the Middle East. The airline’s head office is located at Soekarno-Hatta International Airport, near Jakarta, the Indonesian capital city. The Indonesian government owns most of the airline’s shares. 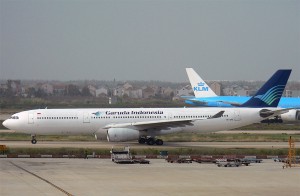 Garuda will operate the A330-300 aircraft on services from Denpasar and Jakarta to several destinations, including Asia, the Middle East and the Pacific.

Emirsyah Satar, Garuda president and chief executive, said, “The A330 has proven to be a key element in the success of the revitalised Garuda Indonesia. The low seat mile cost and high passenger appeal make the aircraft a perfect fit for our fleet and a firm favourite with our passengers”.

Satar said this purchase is part of the airline’s Quantum Leap program aimed at expanding Garuda’s fleet and add more medium- and long-haul flights. Satar said, “In line with the Quantum Leap program, Garuda will operate 194 aircraft in 2015, consisting of B737-800 Next Generations, A330-300s, A330-200s, B777-300ERs and A320s that are operated by Citilink, with an average fleet age of 5 years.”

Garuda plans to expand its fleet to 194 aircraft during the next 3 to 5 years.