The passengers on a plane leaving Sweden helped to prevent the deportation of an Iranian man. All they did was refuse to buckle their seatbelts, a requirement by law before a plane can take off. The pilot was left with the only decision to cancel the flight and let the passengers off.

Ghader Ghalamere is a refugee from Iran. Despite having a wife and children in Sweden, who were all Swedish natives, he was being forced to leave the country and return home. His life would likely be in danger, and he reluctantly boarded the plane knowing the chances that he could die and never see his wife and children again. It was a terrible case of injustice for the man, but luckily for him his fellow passengers agreed.

Activists boarded the plan and handed pamphlets out to the passengers. After reading the pamphlets a number of passengers decided that they would not fasten their seatbelts, and would not leave the flight. Without this happening, the pilot could not take off, and Ghalamere could not return home.

Due to Swedish law, Ghalamere could only apply to be a resident of the country outside of it. He had already tried that in Norway, but had failed. The Swedish Migration Board informed him that he would need to return home to reapply there. However, that would put his life in danger. 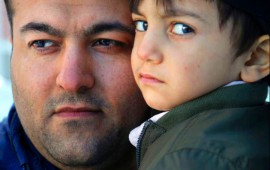 As a member of the Kurdish Democratic Party, he had previously fought against the current Iranian government. After fleeing to Turkey, he met his wife and became a refugee under the United Nations High Commissions for Refugees. If he does return to Iran, imprisonment would be highly likely, preventing him from getting back to Sweden. He would be very lucky not to receive the death sentence for his treason, especially now that his return to his home country has become international news. There are many calls from the fundamentalists in his country to get him back to them where he can be persecuted.

The protest against his deportation was extremely dignified, safe and sensible. It prevent others from getting to their destination and meant that the plane was on the tarmac for a “long time” according to the crew. However, it did not put the lives of anyone on board at risk, and made it clear that most were in favour of this man being allowed to remain with his family.

There was even an upcoming European Parliament candidate involved. Malin Bjork helped to convince the passengers to not fasten their seatbelts because he supported Ghalamere’s cause.

While the passengers were allowed to go home—or find other ways to get to their destination—Ghalamere was taken to a Gavle detention facility.  He would remain there until his deportation was rearranged if it was not for the next steps taken by people around him.

Since then, an online petition was drawn up to help keep the Iranian man in the country, and help him gain citizenship. Ghalamere found extra strength from this support and decided on a hunger strike after returning to the centre. He was released from the detention facility within a few days.

It turns out that the news surrounding his deportation caught the attention of the Iranians fundamentalists. They wanted to see Ghalamere back in the country, where he would be imprisoned and killed for his treasonous act those many years ago. It became clear that his life was definitely in danger, and he gained the support of the Refugee Support Groups and Swedish Network of Asylum. Sweden agreed that it had to do something to protect this man, especially with a wife and children already citizens. While he is not officially allowed to remain in the country, the migration board has opened his case again and will look into it.

There are still chances that the migration board will come back with a refusal, but there are limited grounds now. There is also the fact that so many people are in support of keeping him there. If it was not for the passengers on the plane and the backing from a candidate for the next European elections, it would have been a very different story indeed.

Only time will tell what will happen. However, it will be questionable if the Swedish Migration Board are willing to put a man’s life at risk by sending him back to his own country. His wife and children have not spoken out about Ghalamere’s plight, but are awaiting the decision from the board.