The Turkish Armed Forces received its second Peace Eagle Airborne Early Warning and Control (AEW&C) aircraft from Boeing recently. It was delivered to the Konya Air Base, which is the main operating base for the country. There are hopes that this new aircraft with strengthen the defense capabilities in the armed forces, according to Boeing.

The Delivery of the First Aircraft 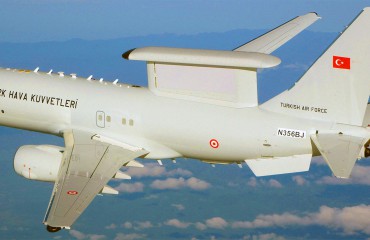 On January 31, 2014, the Turkish Armed Forces received its first aircraft. However, the receiving of it was not officially until the middle of February that year. It was major news in the area, since the country would now have the ability to track maritime and airborne targets at the same time, along with manage battles more efficiently and offer better airborne surveillance.

It was also not just about helping the armed forces have a better defense system. The aim was to prove that relationship between the two countries—since Boeing is a US company—is strong. There is also the show that the Turkish government has an excellent relationship with other Turkish companies, including Turkish Airlines and the Turkish Aerospace Industries.

There was no delay in getting the new aircraft off the ground. Training for the mission pilots, maintenance workers and system operators had already taken place. Everyone could simply get on with their roles, making the aircraft extremely cost-effective.

The Delivery of Four AEW&C Aircrafts

There are three aircrafts that will be delivered in the end. There are three planned for 2014 in total, with two of those now already delivered. The fourth will happen in 2015. So far, all deliveries have been on schedule, and there have been no issues in developing the aircrafts. It has made it extremely easy since the AEW&C is created based on the already highly-successfully Boeing 737-700 aircraft.

Turkey is not the only country to gain one of these platforms. So far, South Korea and Australia have access to them.

All training is delivered by Boeing too, which is part of the Peace Eagle program as a whole. This helps to keep the costs down for other companies, while making sure the exact type of training is offered.

The Development of the AEW&C

The AEW&C aircraft was primarily designed based on the Boeing 737-700. While that made the initial part easier, there were a number of modifications and developments needed to create something that would be perfect for the Turkish Armed Forces.

This is certainly not the first military aircraft designed by Boeing, a traditionally commercial aircraft company. The E-3 Sentry was one of the first, and developed based n the 707.

However, the Armed Forces needed something lighter, and more suitable for its defense systems. It was created for the Australian Armed Forces, which specifically requested something that would be suitable for certain needs. Some modifications were needed to balance out additions, like the radar and nose countermeasures.

It was never initially a major success. The development fell behind schedule rather quickly, but that has not stopped its usefulness. Australia proved that it was so useful that South Korea and then Turkey bought versions.

Turkey has named all four of its aircrafts that it will receive. The first two have been named Kutzy and Guney, which mean North and South. The next two will be named Dogu and Bati, which mean East and West.

Use in the Malaysian Plane Search

When the Malaysian aircraft went missing on March 8, 2014, the AEW&C was one of the first considerations when searching for it after realizing that the “ping” from the black box would not be found. Australian launched its own, mainly due to Turkey only just receiving its and needing it for other uses. Australia also had other versions.

Other Countries Buying the Aircrafts

There are now other countries looking into purchasing the modified Boeing 737 aircrafts. Italy is one at the moment seriously considering the option. It will become the first wholly European country, as Turkey is split between Europe and Asia. The United Arab Emirates is also allegedly considering purchasing the aircraft, but this has not yet been confirmed.

Japan needs to start looking into long-range options, and the AEW&C could be the perfect option. At the moment, the country is looking into all options but will consider it further if the Senkaku Island dispute continues and gets worse.

Turkey is now waiting for its last two AEW&C aircrafts. So far, the deliveries are on time and all modifications have been made to the Turkish Armed Forces’ needs.