Antonov Design Bureau designed the Soviet Union’s planes during the 1980s; specifically the Antonov An-225. It was also known as Mriya, but was referred to as Cossack during NATO reporting. The Ukrainian name means “dream,” as was supposed to represent “inspiration.” It remains in service to this date and is primarily used by Antonov Airlines. 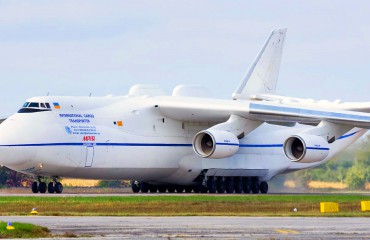 The Making of the Antonov An-225

Mriya was originally developed to transport the Buran spaceplane. This was at the height of the Cold War, when the Soviet Union and USA were involved in the space war. It was supposed to be a larger version of the Antonov An-124, which had already proven to be successful. However, the Soviets needed something larger, capable of carrying heavier loads.

This plane was able to take off with a maximum of 640 tonnes in its hold. It remains as the heaviest and longest plane ever to be built, and need six turbofans to power it. Another record that it still holds is the one for the heaviest payload of a single item, which weight almost 190,000kg (almost 420,000lbs), and the heaviest total payload, which was over 250,000kg (almost 560,000lbs). Those payloads were for private military flights. When it comes to commercial loads, its heaviest has been 247,000kg (545,000lbs).

The Initial Design and Development

Remember that the whole idea for the Antonov An-225 was to tranport the Soviet space program’s Buran spaceplane. It was to replace the Myasishchev VM-T, which was currently in service at the time. When compared to American planes, it was supposed to mimic the Shuttle Carrier Aircraft.

The SCA were two Boeing 747s modified to be able to transport the orbiters for space shuttles. A short range -100SR was used, while the regular -100 was the other one. The only job was to get the shuttles from the Kennedy Space Center to the Shuttle Landing Facility, as well as other locations that they could possibly need to be transported to. In other words, very little was needed, but it was still a very important job.

Without these aircrafts, space launches would be difficult to take off since getting them between hangers and the launch pad would be near impossible. 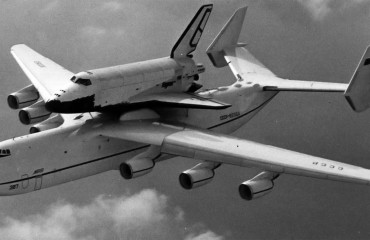 An-255 with Buran shuttle attached to top

With all that in mind, it was relatively easy to create the plane. There was even a plane that Antonov could base the design on to make it easier. The An-124 needed slight modifications to make it larger and still keep safety as its number one priority. The fuselage barrel extensions needed to be added, and the wings needed a large span, which was gained through root extensions. Extra engines would be needed to take on the weight, so two Ivchenko Progress D-18T engines were added to the extra wing span.

A new landing fear system would also be needed to support the extra capacity. 32 wheels were used in the final design, with some of those steerable. The aircraft would be able to turn on a 60m width runway.

Most other features of is inspiration were kept. This included the ability to kneel the nosegear for easier unloading and loading of the cargo. However, some aspects needed to be changed for the weight problems. The cargo door and ramp at the back of the plane was removed, and a twin tail was added to help stabilize the plane.

The plane was developed with Airbus’ maximum take off weight in mind, and managed to surpass it twice. However Airbus is fighting back, by working on an A380 that will have a maximum landing weight of over 1.3 million pounds.

There were other records that the Soviet plane would have liked to have gained, but are surpassed by other companies. One of those is the largest cargo hold, which the Boeing 747 Dreamlifter holds. The Hercules takes the record for the highest and having the largest wingspan, although the craft was lighter and shorter. The Hercules only flew on one trip, which puts the An-225 at the top for height and wingspan for planes that have flown multiple times.

The maiden flight took place on December 21, 1988. It lasted just 74 minutes, and started in Kiev. After that, it went on static display at the Paris Air Show, and then a year later was on display for the public in the United Kingdom at the Farnborough air show. 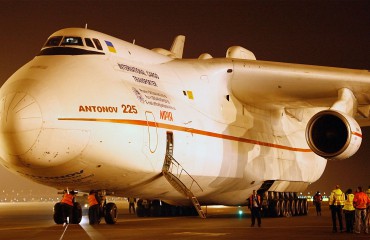 There was an order for two of these aircrafts. In the end, only one was created and is still in use today. The second craft was halted when interest and budget became issues. It was partially built though, and had a few variations compared to the first. It would have the rear door and the tail was redesigned to have just one stabilize for the vertical weight. There was hope that it would be the most successful out of the two.

The other issue for halting the development was the cancellation of the Buran space program in 1991. The Cold War came to an end, and the Berlin Wall was completely torn down. America had won the space race, and the only An-225 fully built was put away in storage. The second would be stored in its uncompleted state.

It seemed like the end of the aircraft. The six engines were removed, and used for its predecessor the An-124. It would have likely stayed there if it was not for someone adding the engines back in. It was placed back into service, but the second remained unfinished, and it seemed to stay that way until 2006.

The Finishing of the Second Antonov An-225

It was clear that more was needed from the first airplane. Extra space was required, and that could be gained with the second, unfinished aircraft. In 2006, work was started to finish it. By 2008 it was supposed to be finished, but there were several delays. It was in 2009 that the work was abandoned once more. Two years later, the CEO of Antonov decided that the work should be completed. The second Mriya would cost $300 million to complete, and have be able to handle up to 250 tons. It would take three years to finish if there was financing. Three years on and the work is around 65 percent complete, depending on the source. Some wonder whether it will ever be finished, and whether there will even be a use for it when it is.

Using the Craft for Commercial Flights

Considering the initial use, there was never the thought that the plane would be used for commercial airlines. However, the Soviet government found it had a problem at the end of the Cold War. The director of Antonov Design Bureau didn’t want the plane to go to waste, and set up its own corporation for airlift shipping heavy objects. It would be based in Kiev, but operate from London Luton Airport.

Originally, the An-225 was not going to be used. The company has three Antonov An-12s and four of the An-124s. But a larger aircraft was needed, and that led to adding the engine back onto the An-225. It was placed into commercial service.

It would be a little longer before it would be used regularly for commercial flights. On January 3, 2002, it flew from Stuttgart to Thumrait to send military meals to the members of the American Armed Forces. After that, it moved locomotives, generators and other larger items that were required on a regular basis. It was also involved in the moving of emergency supplies when it came to disaster relief operations. 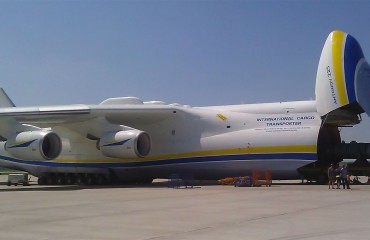 A number of other companies have contracted the plane for the moving of various forms of transportation. Some of those have been aircraft companies. Delta and Atlas rocket launch parts were transported, according to the Director of the Charter Division of Air Foyle, Bruce Bird. It was also considered for flying the Venture Star from Lockheed on its back. The hold can also be fitted with a Boeing 737, giving you more of an idea of the size.

Despite being contracted by other companies and governments, the Antonov Airlines still controls it and is the primary user.

The Antonov An-225 was just one plane crafted during the Cold War, and designed with one purpose in mind. It seemed promising at the start, and even when it made its maiden voyage. However, it was soon clear that the Soviet Union had lost the Cold War and the space race. The An-225 was no longer needed. It was only because of Antonov’s airlift shipping venture that it was needed again. It could have remained in storage for the rest of its days, being used for spare parts for various aircrafts around the world.