The Boeing 747 is one of the oldest models from the company, and is still around today. It was nicknamed the Queen of the Skies and the Jumbo Jet when it was first created, and became the first wide-bodied commercial airlines. It has since been used for inspiration when it comes to creating other aircrafts.

The Creation of the Boeing 747 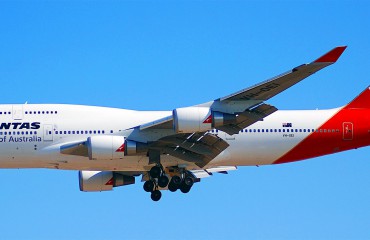 In the 1960s, Boeing had become an extremely successful airplane manufacturer. However, people and companies wanted more than the narrow-bodied 707. During the 60s, the 747 was designed and developed, and first introduced in 1970. It wouldn’t take long for the 767 to be designed based on this major aircraft.

The airliner was 2.5 times larger than its predecessor, the Boeing 707. It even held the record for the most passengers for 37 straight years. However, over time the size got smaller, and different versions were available.

There was a focus on creating a first class section that was away from everyone else. The Boeing 747 was the first to create a second deck, which would serve as that lounge. However, now many of the airlines will opt for it as extra seating when the time is needed. This also allowed the plane to be easily converted into a cargo plane, since the seats could be removed and the cargo could be kept away from any passengers.

The 747 was originally going to be converted into cargo planes when it was first designed. There was the view that supersonic airliners would take the world by storm, and mean that the Boeing 747 and predecessors would become obsolete when it came to flying passengers. They were very wrong. The 400 mark was passed (the expected number to sell), and the 1000 mark was met in 1993. Production slowed down slightly, and there are now around 1,482 aircrafts available. The supersonic airliners haven’t quite taken off in the way expected.

The Fastest Airliners in the World

The 747-400 remains to be the most popular passenger aircraft when it comes to the range of 747s available. In fact, this is the case for the majority of aircrafts in service today. This is partially due to its speed. It is one of the fastest and can reach a speed of Mach 0.85 to 0.855, which is around 570mph!

Its distance is also one of the best. It is able to fly around 7,260 nautical miles, which is 8,350 miles. That allows for a number of destinations to become viable extremely easily. It is why it is one of the favorites for intercontinental travel.

The Passenger Layout in the Boeing 747 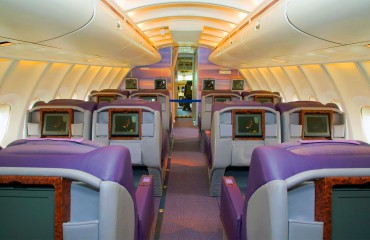 The Upper Deck on a Boeing 747

Among the speed and distance, the Boeing 747 is one of the largest aircrafts available. With its three-class system, it can take up to 416 passengers at one time. The planes that have the two-class system will take up to 524 passengers, while the single-class system allows up to 600 people to travel at any one time. This is much more than many other planes in existence, making it popular for companies that have extremely common destinations. It allows the companies to reduce the amount of flights, making them more cost effective.

The 747 is so popular that there are still versions being created today. The 747-8 is currently being produced, after receiving its certification at the end of 2011. Lufthansa was the first company to receive a 747-8I in May 2012. However, there are plans to replace the current aircrafts with the Y3, which is part of Boeing’s Yellowstone Project. There are no confirmed dates of when this will happen.

The Decision to Develop the 747

It was due to the United States Air Force that development started. Large aircrafts that would allow strategic transportation were required. The C-141 Starlifter was available at the time, but bigger aircrafts were a necessity. There was a large amount of outsized cargo that could not fit in the Starlifter, or any airplane at the time.

There was a lot of research into the requirements needed for this to be viable. Certain requirements like speed, distance and weight were necessary to make the plane work for the US military, and that included an unrefueled range. This was not such an issue for the commercial liners at the time.

The request was that it would only have four engines. Even in the 1960s, there was a focus on being more fuel economic to help keep the cost down for travelling. A number of major airline manufacturing companies put in proposals in the hope that they would receive the bid for the aircraft. At the same time, a number of engineering companies submitted proposals for the four-engine system.

Many of the proposals had similar elements, including moving the cockpit out of the way and above the cargo area. That cargo area needed to be at the front, which would have caused issues for the pilot otherwise. It seemed like Boeing was not going to get the bid at first, as Lockheed was chosen. In fact, Boeing liked the Lockheed design so much that some elements were passed over to the eventual 747.

The benefit for Boeing was that air travel was becoming more and more popular in the 1960s. The company decided to focus on something that would help with commercial airline travel, especially on the back of the Boeing 707. Pan American World Airways—also known as Pan Am—contracted Boeing to created a passenger aircraft that would be two times the size of the Boeing 707, and help to reduce the number of aircrafts in the airports. Not only was fuel economy bad for the amount of passengers now wanting to travel, but the congestion at the airports was getting worse.

By mid-1966, Pan Am has placed an order for 25 of the 747-100 aircrafts. It would cost the company $525 million. There were benefits for the airline company, since it could have some influence into the development and design. 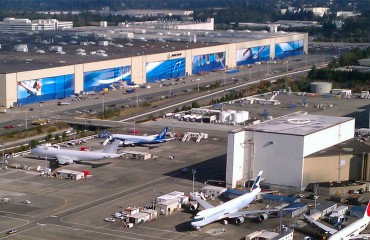 The Boeing Everett Factory, where the 747 is produced.

There was an issue for Boeing. The current production plants were not large enough for the development of the 747. There were a few options available, but Boeing decided that a new plant was the best option. 50 cities were looked into, and Washington state was the final decision. The plant was built in an adjoining site to the Paine Field military base, about 30 miles away from Seattle.

It did not make the building of the Boeing 747 much easier. The plant needed to be build first, but this was a major task to start with. The site needed to be levelled, and that led to over four million cubic yards of earth being moved. While the plant was being created, so was the aircraft. In fact, the mock up of the 747 was created before the plant’s roof had been installed. That definitely helped to limit the delays considerably.

The Testing and Problems

Testing was able to start virtually on time, but this was where some of the biggest problems occurred. The FAA had a 90 second maximum time limit for evacuations, but it took 2.5 minutes for 560 people to be evacuated from the mock of the cabin. Not only that, but a number of the volunteers acting as the passengers were injured during it. The main problem was the upper deck, since a reel was used instead of a slide.

Other tests proved to be problematic for the airliner to pass. It seemed almost impossible to get the Boeing 747 off the ground. Changes were made to the designs, and the first flight took place on February 9, 1969. There were minor problems, but the handling was extremely well. Through later tests, the wings started struggling under some conditions, which was a relatively easy fix by reducing the wings’ stiffness. Counterweights were also placed across the plane, which did cause anxiety problems if the plane would crash.

The next issues to happen were those with the engines. This put the testing program back a little, and meant that 20 aircrafts were stranded at the plant while they waited for the JT9D engines. Once the engines did arrive, there was a crash on the first set of flight tests, also pushing the development back.

Additional Funding Needed for the Development

With all the setbacks, Boeing was starting to run out of money. Extra funding was required, and the company had to continually make requests. It could have been all over, and even the company as a whole was facing financial problems if it did not get this funding. The company was in $2 billion worth of debt, with $1.2 billion owed to banks. This was a record for aircraft companies at the time.

With hindsight, spokespeople did agree that the project was too large for the company. It was a gamble, and there was just hope that the 747 would become one of the greatest planes to even fly the skies. It was a gamble worth taking looking back, and Boeing gained the monopoly over the skies that it needed. 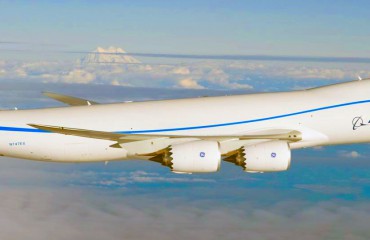 Over the years, new versions of the 747 were designed and created. The 100B version would have a higher maximum takeoff weight, while the 100SR version allowed more passengers to sit. By allowing more weight, more fuel could be taken and this meant the flights could last longer. In 1971, the 200 model was created and had more powerful engines.

Longer range aircrafts were continually a necessity. It led to the creation of the 747-400, which remains to be one of the most popular airliners in the world.