The Airbus A340 took its first flight on October 25, 1991 and made its way into the commercial world two years later. While it is still in service today, it is currently out of production so there will be no more of this creation made. However, that does not take away some of the biggest achievements and the history of the Airbus plane. 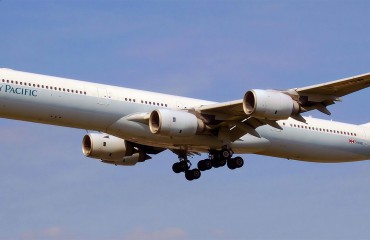 The Start of the European Long-Range Aircraft

Airbus is a consortium of different European air companies, and was originally known as Airbus Industrie. The A340 was one of its first wide-bodied commercial jet liners, taking its designs from the twin-engine A330 initially. There are various models of the A340, which offer from 6,700 nautical miles to 9,400 nautical miles in one flight. This helps with the transatlantic and Pacific Ocean flights.

The main difference between the Airbus 340 and its predecessor is the upgrade from two engines to four. It also have the three-bogie landing gear equipment installed.

After the development of the first version, the -300, shorter versions or longer-range versions of the plane were needed. This led to the -200, -600 and -500 versions. The -500 version is able to travel the longest, and remained the longest-range commercial aircraft until Boeing introduced the 777-200LR. Rolls-Royce took over the development of the -600 and -500, which meant that the plane could have larger wings, a longer body and travel further.

However, the initial version remains the most popular, with 218 already delivered by September 2011. This was out of the 375 of all four versions delivered. So far, Lufthansa has decided to take on more of this aircraft than any other airline.

The production ceased on November 10, 2011, after the twinjets became more economical to make and were favoured by the airlines. This has meant more emphasis has been placed on the A340’s predecessor, the A330.

The Development of the Airbus A340 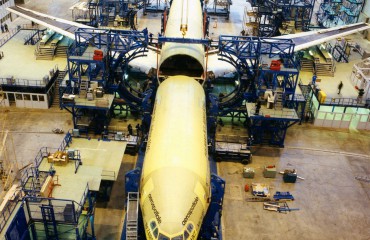 The First A340 in production

During the 1970s, a competition against Boeing and Douglas, the two American manufacturers, needed to come out. This led to the creation of Airbus, which created the A300 to start with. The Europeans put all their focus into this one company, which had long term goals for its success. Even before the first liner was created, nine variations of the A300 were considered, and a 10th within a few years of starting out.

After deciding to focus on the single-aisle version of planes, the A320 family became the priority. This then led to the four-engine development, with the German division proposing it. The Europeans wanted to challenge the Boeing 737, and started creating planes that would fight against it. However, the 737 became too popular and Airbus decided to go back to the wide-body options.

Douglas became the company to compete with to start with, and Airbus had a major opportunity. It decided that it would meet the payload of the DC-10,but it would use from 25 to 38 percent less fuel. It was considered a replacement for the Lockheed L-1011 Tristar as well as Douglas’ CD-10.

Now all Airbus needed to do was plan strategically. While the Americans wanted the twinjet aircrafts, the Asians wanted the four-engine powered planes. Europe was divided. Despite costing more to make, there were many benefits to the four-engine crafts. One of those was the ability to fly someone with one of the engines out. This was not possible at all with a twinjet, and meant more emergency landings.

Various different models were created, with flight control systems using the fly-by-wire, and the side-stick control system. Many designs used the same wings and components to help keep the costs down. The common design features also made it easier for pilots to switch from one type of craft to another, keeping the costs down. Maintenance costs were also at a minimum since fewer different parts needed to be created.

It was only after Douglas and Boeing merged that the work on the A340 officially started. Initially, there were talks of Douglas and Airbus teaming up, using the A330 wing and the MD-11 fuselage, but the trijet heritage was a insistence from Douglas, which Airbus did not want to opt for. After the MD-11 failed, there was a clear market for the A340.

The Initial Designs of the Airbus A340 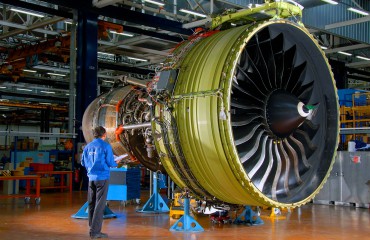 The initial designs used a turbofan engine, and the trijet was certainly considered. It would allow to compensate for the limited power many of the engines had at the time.

All the discussions led to the Airbus Industrie Supervisory Board meeting. The details were finalised and the planes that the company has previously been working on, known as the TA9 and TA11, would now become the A330 and A340 respectively. There was the potential for consumer airlines to take the planes. The A340 later became the name for the TA9, since that model had the quad-jet unlike the TA11.

Lufthansa, Swissair and three other airlines received proposals for the new developments. Everything was finally underway.

The Problems for Airbus

Unfortunately, the development for the A340 didn’t quite go to plane. There were a range of issues in the development, including financial ones. Despite being able to save money, the UK government only granted the company £450 million of the £750 million requested. Airbus needed to find the money elsewhere. Money came from Germany and France at a later date, and subcontracts were issued to many countries around the world.

Another problem occurred during the testing. It was found that the wings were not strong enough to cope with the speed. Modifications were needed to get it ready for the long-haul flights that it would need to do. It meant the extra two years between the first flight and the certification to be added into service.

Overcoming the problems and showing that it did not suffer from the same problems as the MD-11 did help the A340 become a favourite for Singapore Airlines. The airline company needed a plane that would fly from Singapore to France without stopping. The MD-11 was expected to do that but suffered poor performance during testing. The orders for the MD-11 were cancelled and the airline placed an order for 20 of the new A340s.

Continued Development While in Service 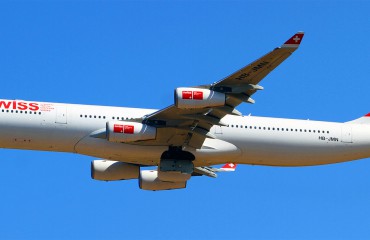 Just because it had been placed into service did not mean that it was all over for the designers. Further modifications were needed. The A340-300 was the first to hit the skies, but the manufacturers realised that there was a market for much more. Shorter versions, longer versions and longer-distance versions were all a necessity.

The first development was the A340-200. This was the shortest of the family developed, and perfect for the longer-haul flights. The problem was that it could not hold as many passengers or as much luggage. There was a requirement for more than 240 passengers on the plane.

The -500 and -600 were both developed at the same time. The -600 would become the longest version of the family, meaning that more passengers would be allowed on the flight. However, there were requests for one that would travel further. This was the reason for the development of the -500 version. The bigger versions would take up to 350 passengers at once.

Avoiding the Restrictions on Twinjet Aircrafts

Since the A340 family is a quad-jet family, it has managed to avoid many of the restrictions placed on the twinjets. The restrictions are there for the safety of passengers, but the quad-jets are able to handle more in a shorter space of time. One of those is the ability to fly direct to destinations over the water. This has made it possible for the Singapore to France destination, among many others. It has not quite made all destinations doable, but there are now possibilities. 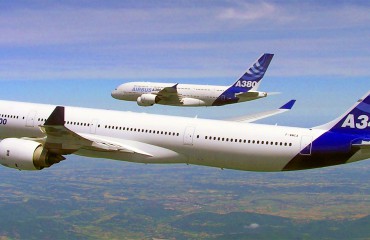 The Airbus A340 and Airbus A380 flying side-by-side in this Airbus artwork.

The aircraft can also fly at higher altitudes because the engines are able to hand the climatic conditions at those levels. Travelling over difficult terrain is also a possibility. These facts suggest why this aircraft became so popular at the start of its development, and continues to remain in service today.

Over the years, 550 million passengers or more have flown on an Airbus 340. It has completed 2.5 million cycles, and accumulated 18 million hours while in flight. When it was at its peak, it was responsible for 16.2 hours of flight on average on a daily basis.

The commercial airlines have not been the only companies to take on the Airbus A340. A number of private companies and businesses have bought one of the jets for their own needs. There is no telling how long these jets will remain in service.

One of the major benefits is the operational reliability. It has a 99.7 percent reliability for its customers, making it one of the favourites to fly on. There is very little chance of an issue either on the ground or in the air. The issue was the performance as faster, longer needs were introduced. This is why Airbus has continued to make improvements as the time has gone on. There is now the capability to take on more fuel than in 1991, and carry more weight for the journeys.

It continues to be a favourite for many companies, and has come a long way since its first flight in 1991. However, the production has ceased. More and more companies favour the twinjet engines, despite the restrictions on them. Only time will tell when the jet finally retires from service.

Long Queues at UK Ports and Airports After Computer Glitch