Technology is only great when it works properly. The UK Border Control showed just how much the world relies on computers and how annoying the setbacks can be after the computer glitches caused long queues at various ports and airports around the country.

The issues began on Wednesday April 30 when the computers that scan passports stopped working properly. Engineers worked around the clock to make sure the issues did not continue into the Thursday. Most ports were back to normal by Thursday afternoon and the queues could be cut down. 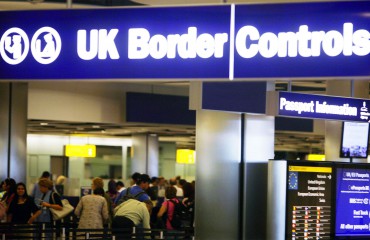 It is important for the Border Control staff to find a fine balance. There are still a large number of people being smuggled into countries or travelling on false passports. The computer systems are in place to protect countries from the illegal activity that comes with that. There is also the safety of the national people to consider. However, innocent people are always caught in this fine balance, with many being forced to wait for hours on end while staff get through the queues.

As a way to find a balance, more staff were called on duty. They were called to conduct the passport checks manually to get people through the gates as quickly as possible.

Due to the arrangement with EU countries, it meant that those from outside of the EU were mostly affected by the computer glitches. Further checks need to be involved when looking into the passports from other personnel. The EU passports are all the same, and have the same security benefits.

All it meant was longer queues though. Eventually everybody got through and were able to continue with their day. While people were annoyed, most understood that the Border Control staff members were acting as quickly as possible. It was not their fault that the computers went down.

Unfortunately, there were people who expected things to move much quicker than they did. EU passenger Chris Hyland explained that he had been waiting an hour and 20 minutes after his Geneva plane landed. There was no back-up plan in place in case the computers went down, and he mentioned that nobody was informed about the reason except that there was a technical glitch. The lack of information may have been more annoying than anything else.

All Airports and Sea Ports Affected

While the London airports and Channel crossing are the most used options in the United Kingdom, airports and sea ports all over the country were affected. They all run on the same computer system, which had a glitch that meant the passports could not be read properly. The Non-EU passengers were facing delays of up to four hours in some of the airports.

The good news was that by the Thursday afternoon, most of the major airports like Heathrow and Gatwick were back to normal. Passengers no longer needed to hold off making planes for hours after their flights had landed.

There are some lessons to be learned moving forward. The first is that technology breaks. The UK Border Force really does need a back-up plan should the computers break again—and they probably will do. Getting more people on the gates sooner rather than later is a must. It will help to keep the initial wait to a minimum, which helps passengers later on.

Another lesson is to keep passengers informed. People have a right to know what is taking them so long. While there are times that people will not know the actual reason, giving as much information as possible is important. Regular updates can really help ease the frustration passengers feel. It would also be helpful to let passengers flying in later on that there may be a delay getting through. This can be done through social media, and on the flights before they land.

Controls also need to be placed along the queues. According to some passengers, fights broke out as people accused others of queue jumping. There is nothing to say whether refreshments were on offer during these long waits, which would have also led to frustrations within the ports.

There is a need to find the balance between safety, comfort and keeping queues to a minimum. Unfortunately, it is very difficult for the UK Border Force to do that. There are still cases of people coming in on forged passports or trying to sneak items through. The only way that that can be kept to a minimum to ensure the safety of the UK people is to check every single passport that is shown upon arrival.