When a piece of space debris landed in the Amazon last month, the people of the nation were not sure what to think. The only thing they knew was that it held the British flag, along with the words “UK Space Agency.” But it could have been from anything.

A local fisherman decided it was worth getting a group of others from his village together to get the debris to shore. They could then report their find and wait to hear an answer. It took a while, but the UK Space Agency has finally confirmed that it is a piece of debris from a mission back in July 2013. 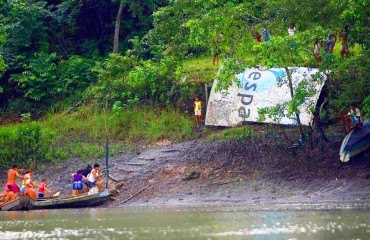 The Space debris that landed in Brazil

The Finding of the Debris

Manoel Alves dos Santos was just going about his usual fishing day, when his line got caught. He never expected to pull some debris that had fallen from space out of the water, and he had no idea what it was. All he knew was the ownership. It was clear that the UK owned it due to the British flag. That solved that riddle, but what exactly was it and was it worth any money?

Dos Santos got a group of men together who hauled the debris to land. They could then arrange from someone to come and check it out. Nobody knew what to think. Nobody really knew what it was that they had found. Was it from a satellite? Maybe it was a crashed ship that nobody had heard about.

The 73-year-old explained to local news that it was something he had never seen before. He just wanted to know what it was, which is why it was pushed to the river bank.

The Response from the Local Media

It was only due to local media involvement that the whole situation was taken seriously. The local police were not interested, and it led to a delay in reporting the find to the UK Space Agency. Once the news spread with the help of O Liberal newspaper, the police and military decided it was time to check out the find. It was time to find out what had landed in the Amazonian river, and how it was even possible.

It’s surprising that the local police refused to take it seriously at first. According to the media, it was the size of a car. It did take 10 people to move, after all. Something on this scale should have surely been taken seriously.

It took some time, but the UK Space Agency finally responded to the questions regarding the debris. While many would acknowledge who it belonged to, spokeswoman Julie Short finally explained where it came from. It was part of the launch vehicle payload shroud for s satellite that was launched back in July 2013. It was launched from France’s Kourou base, which also explains the European satellite logo that was on the debris.

But how did it get into the Amazon? While that question cannot specifically be answered, there are thoughts that it initially landed in the Atlantic Ocean. After that, it travelled by the current into the Amazonian river. However, there is no way to confirm that, and nothing about the satellite that it comes from has been mentioned.

Brazil do not seem too happy that it has ended up in its part of the world. The authorities have turned to the UK Space Agency to make sure they take ownership of something that is already clearly theirs, and get it removed. There has been no confirmation of the logistics of that yet. It certainly doesn’t seem like something the 73-year-old fisherman wants to keep as a memory of his find. It would be too big for his home.

Other Times Space Debris Has Landed 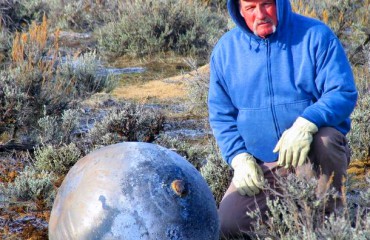 This is not the first time that debris from space has been found on Earth. Items in the solar system are damaged regularly, and float around for some time. Eventually, they are pulled into the Earth’s orbit, and are pulled to Earth by the gravity force. Luckily, the majority of the time they land somewhere that will not cause too much damage to people or buildings.

Most of the time this happens because the satellites are switched off and then left in space, rather than being pulled back down to Earth. Many countries around the world opt for this method to get rid of their “junk,” but it causes havoc. There are times that countries will opt to have their satellites pulled back down.

In March 2011, a Colorado man came across a piece of space debris, finding it in a crater. It took some time to get NASA’s attention, but eventually he found out that it was only two months old—according to the launch date—and was a Russian Zenit-3 rocket.

Back in 1997, an Oklahoma woman explained her literal brush with space debris. She felt something touch her shoulder after seeing a flash of light. It turned out to be part of the 1996 launched Delta II rocket. This was not the only debris that hit during this time. Texas saw the fuel tank from the same rocket land, narrowly missing a farmhouse.

While the debris landing is a danger anyway, there are certain elements that are more dangerous than ever. In January 1978, Canada saw that when radioactive material was scattered from the Kosmos 954. This Soviet surveillance satellite crashed, damaging its nuclear power generator. Thousands of Canadian square miles were affected by the radiation, according to the government, and it meant a frantic cleanup to avoid affecting the local people. Only 0.1% of the debris was recovered during the campaign known as Operation Morning Light. There is little known yet about the damage that that radiation has done.

After Finding the Objects

There have been times that the people who find the objects want to keep them. It is understandable considering the once in a lifetime opportunity of finding space debris. However, it does not always work out, as some beachcombers found in 2000. They found some debris, and contacted the relevant authorities. It turned out to be the Ariane 5’s pointed nose.

The finders thought it would make the perfect hot tub, and really wanted to keep hold of their find. NASA refused that, and made it clear that it was simply not possible.

The Need for Cleaning Up Debris

There is a big campaign currently about the amount of debris flying around in space. It is clear that there are dangers of it falling to Earth, and there is no telling what will happen once it does reach the Earth’s orbit. NASA and other space agencies hope that it will not land anywhere dangerous or destroy homes and lives, but there is no guarantee that that will ever happen.

It is simply impossible to control the debris once it is controlled by gravity. It acts like any meteor or comet that reaches Earth’s orbit. The best thing that the countries can do is find a way to get the debris out of space and into Earth calmly and safely. There should be the idea of “what goes up, must come down” at some point.

Rockets are used to get the satellites up in the first place. Surely, there must be a way to get the rockets to bring them back down once they have been turned off. The problem for the space agencies is to find a way to do that safely. There are risks to the astronauts’ lives when they are out trying to attach everything to the rockets. At least with the drop offs there are elements within the rockets to release the satellites or unmanned rockets can go up and be left up there—causing more havoc once in space.

There have been attempts to safely get the satellites and debris down. The Salyut-7 Space Station is one example of that. The Soviets tried to bring it down carefully to plan where it would land. They wanted it to land in the Atlantic Ocean. However, it ended up showering Argentina, luckily missing people and avoiding too much damage.

NASA continue to state that there is no need to bring things down unless they do cause an immediate threat. When bringing them down, there is little danger to people around. There have been no reported deaths or places damaged due to the falling space debris. However, that does not consider the people, like the Oklahoma woman in 1997, who have nearly been killed. Just a few inches closer and it would have been a completely different story.

Most of the time, the debris does land in oceans around the world. However, then there is the problem of the current dragging it to other parts of the world. This was just the case for Brazil, who now have to deal with the UK’s debris that floated to the Amazonian river.

With five decades of space debris up there, eventually it will cause havoc on Earth as well as in space. There surely has to be something done about it. Of course, there is also the question of whose responsibility is it once it lands back on Earth. Brazil want the UK to do something about the fisherman’s find, but the UK hasn’t confirmed it will clear it up yet.

Long Queues at UK Ports and Airports After Computer Glitch