The new NASA space suit has finally been unveiled, and was voted for by the public. The Tron-like suit came up as the number one, and is something all astronauts will look forward to wearing in the future. The tech themed suit is known as the Z-2, and has been inspired by Tron (1982) and an upcoming Xbox One alien-shooter game.

Showing the Trends in Society

Opening the vote up to the public was certainly an interesting way to go about it. Anything could have been picked based on the original designs, and it would always be based on the current trends in society. The recent vote shows that the trend is for the more tech-like suit available. However, it is also a show of the way people view astronauts. While the suit looks like something from Tron, it also gives a basic astronaut feel with the helmet. It is something that many people imagine when thinking about aliens and sending people to space.

There were plenty of designs based on current society trends, including a suit that was based on a fish that was bioluminescent. Sportswear for the future was also an option, but the public turned it down. These trends were either too far-fetched or just not popular enough when it comes to considering people in space.

It is worth pointing out that there is something Buzz Lightyear about the suit. The electroluminescent wiring within the suit gives it a glow in the dark appearance. And the parts that glow in the dark are along the lines of Buzz Lightyear’s suit parts in the Toy Story franchise. It could be a sign that this kid’s movie franchise is still widely popular, and Buzz Lightyear appears as a stereotypical spaceman that the public would like to see replicated.

Over 230,000 people voted for this particular suit. That is 63 percent of the total vote. However, it will not be ready until around November 2014. Then it can be tested to make sure it is ready for space. This is extremely important to ensure the safety of astronauts as they go up into space. There are dangers associated with being literally out of this world.

The trials and testing always takes place at the Johnson Space Center. This has a rocky mock-up of the surface of Mars, to help astronauts get used to the land, as well as test that the suit is suitable. There is also a vacuum that the astronauts can be placed into, so they get used to that type of test. This is important for the suit to make sure astronauts are safe when there is no oxygen at all in the air.

Voters may be disappointed to learn that this particular suit will never actually make it into space, though. This is just part of the Z-series, and the suits will need to be adapted. There are certainly going to be issues for this particular suit, whether it is difficult dealing with the harsh climates of the Mars surface or trouble dealing with zero oxygen levels. The Z-2 is already an improvement from the Z-1 prototype.

The Z-1 was the first, and a way to show the ideas for the new series. After that, it was clear that modifications needed to be made to make sure it was ready for the Red Planet.

The Z-2 was created to add more abrasion-resistant panels across the lower torso, with more durable panels across the top. The initial version was softer, but this would lead to more risk of damage to the astronaut while in space. Many people fail to think about the debris that is floating around out there because they have never experienced what it is like.

There were some problems with the mobility within the suit. The hips and shoulders could not move properly, which made doing things while out there difficult. The mobility is now improved through the use of collapsing pleats among other aspects.

The boots have also been changed back to those that are already suitable for space, and different materials have been used. Some of the materials were not ready for the vacuum of space. However, the new ones will certainly need to be checked.

Further adaptations are expected to be needed over the years. The Z-2 is just the first adaptation, but has not yet been tested. The public vote was just to see which series would be continued based on the look. Eventually one of the Z-series suits will be seen on the Red Planet and will hopefully help people find whether there is life on Mars.

The Z-2 does not have a number of parts and elements that will be required for space. One of those is the ability to handle the harmful radiation that could be out there. There are also extreme temperatures that need to be handled, which the current suit will not be able to deal with.

According to NASA this was on purpose. At this stage of the development, the suits are designed for the non-flight stage. It allows for the design, mobility and other aspects to be developed before focusing on the nitty-gritty aspects. Only when the suits are making their way to the flight phase will the extras be added in.

The extras can usually be taken from previous suit designs. There are plenty out there that have been used before.

What About the Electroluminescent Wiring? 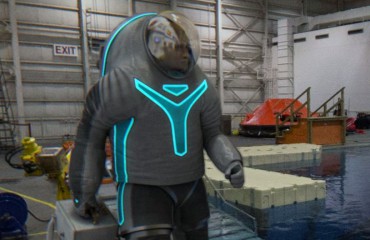 The glow in the dark effect is not just for show. There are some benefits to having this here. The first is that people will be much easier to find while out in space. There is limited light, depending on positioning of certain aspects. This can make it difficult to find someone while they are on the Red Planet.

The first suits were white. These stood out much better in the darkness of space. However, these newer designs have gone for the darker shades of grey and black. It is important to help crew members find each other.

There is also the aspect of being able to tell each other apart while on their spacewalks. This is an issue at the moment, especially when looking from a distance. There is the possible idea that the panels with the wiring will be different for each astronaut. That way it is possible to tell who is who. Now there is just hope that the designs will not be too alike or people will not get the symbols mixed up with each other.

The electro wiring will appear on the front, sides and back of the suit. This helps to locate someone no matter how they stand or the direction they are walking.

The Designing of Suits by Chris Hadfield

The first Canadian to walk in space, Chris Hadfield, recently explained the process of designing the suits. While he is not involved, he does understand the importance of slow development to make sure all aspects are taken care of. The suits are certainly not comfortable, but the design is for safety more than anything else. 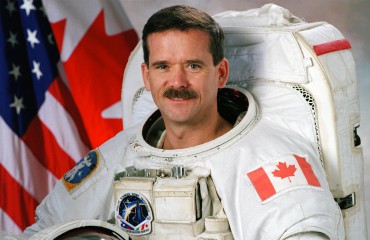 Designers have to think about how the suits will keep a person safe. Once that person steps out of the spacecraft, the suit is their personal spacecraft designed to handle the harsh climate of their environment and deal with situations that are thrown—or floated—toward them.

A person feels weightless once they are outside the International Space Station, and they need to have something to help them deal with that. The suit is all they have.

Many people do not realise the temperatures that the suit has to help a person deal with either. It is possible to be as cold as -140C when out of the sun. However, in the sun’s rays a person can feel the heat of 150C. That is an amazing difference, and something that without the suit would cause the death of people. These temperatures are something that the Earth’s ozone naturally protects the world from.

However, the current aim is to design suits that are not only protective but make it easier for astronauts to move around. At the moment, astronauts have to sacrifice their comfort. They often can’t wait to get back into the International Space Station and take off their suit. The material may look like it fits like a second skin, but it is heavy, clumpy and restricts movement considerably. As technology has advanced, the ability to create something more comfortable has come.

Hadfield spoke about the friction within the suit, and how it causes chafing and bleeding. This is especially the case after six or eight hours walking in space. The astronauts only have the medical care within the International Space Station to help them recover or at least add a protective layer before having to don the suits again.

It just goes to show how much has changed since putting the first man on the moon. It was all about safety—and only safety—back then. Now, there is a focus on offering comfort and style, as well as creating something comfortable. The public have been able to vote for the new Z-series, and now the work can go on to create the most comfortable, safest design an astronaut has ever worn.