The robotic space plane X-37B, the brain child of the United States Air Force, is quickly approaching its 500th day of orbiting the Earth on a very secretive military mission.

The X-37B space plane is currently performing a mission that involves Test Vehicle 3, otherwise known as OTV. This is the third long duration space flight involving the OTV and is only one of many classified missions being performed by the United States Air Force at this time. The unmanned, miniature space shuttle left planet Earth on Dec.11th, 2012 in what appears to be a successful launch. 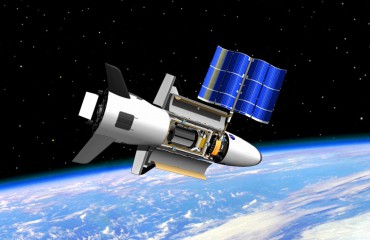 The X-37B is currently working on a mission that involves one of the two miniature robotic space vehicles employed by the United States Air Force. The first of these miniature shuttles successfully completed a 225 day orbit around the earth in 2010 and the second space plane completed an impressive 469 day flight and orbit in 2011. With the first of the two now approaching another 500 days in orbit, it leads one to believe these miniature space shuttles could prove highly useful in the very near future.

These amazing X-37B space planes achieve orbit by being mounted atop an unmanned Atlas 5 rocket. The rockets are launched from well-known Cape Canaveral Air Force Station in Florida. Once in orbit, the X-37B detaches from the rocket and embarks on its mission from there. The miniature shuttle then returns to earth via auto pilot, touching down in California at Vandenberg Air Force Base.

Boeing Space and Intelligence Systems, the producer of the X-37B, announced earlier this year that it plans to make use of NASA’s Kennedy Space Center located in Florida, by adopting the facilities as a landing site for the miniature shuttle.

The X-37B space plane is roughly a quarter the size of contemporary space shuttles formerly used by NASA. It weighs in at only 11,000 pounds and the small payload bay is about the size of a pickup truck bed. The spacecraft measures 29 feet long and 15 feet wide, making it microscopic in comparison to a traditional space shuttle. It can withstand orbits between 110 and 500 miles above the earth.

The secret missions being carried out by the X-37B space planes is under the guidance and authority of the United States Air Force Rapid Capabilities Office and mission control is being conducted by the 3rd Space Experimentation Squadron at Schriever Air Force Base, located in Colorado. This unit is being referred to as a premier organization within the Air Force due to its superb space based demonstrations and its success in past experiments. This unit has enjoyed impressive results and success in various intelligence-gathering mock ups and experiments. Many of these experiments have involved data collected from objects several miles above the earth and the Air Force has high hopes for this program in the future. Many people speculate these miniature space shuttles will not only be used to collect intelligence on the ground but also to study space from a totally new perspective. 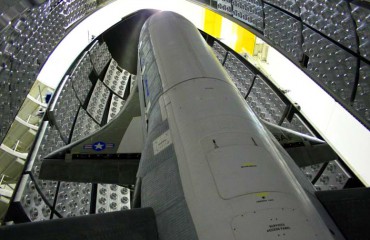 The U.S. Air Force’s X-37B Orbital Test Vehicle is shown inside its payload fairing during encapsulation at the Astrotech facility in Titusville, Fla., ahead of a planned April 2010 launch from Cape Canaveral Air Force Station in Florida.
Credit: USAF

At the moment, it is purely speculative how these mini space shuttles will be used by the United States Government but recent testimonies before congress seem to indicate that many people within the government feel a need for space control. This information, coupled with the missions being conducted using the X-37B, seem to point toward this statement.

Lt. Gen. John Raymond, commander of the Joint Functional Component Command for Space, stated earlier this month before the House of Armed Services Subcommittee on Strategic Forces, that

“Space control requires knowledge derived from satellite situational awareness to warn and assess threats that pose a risk to United States and coalition space operations. Space control may also include threat avoidance, safeguarding of our on-orbit assets and the ability to mitigate electromagnetic interference”.

Some analyst speculate the space planes are actually being used for missions being ran by the Geosynchronous Space Situational Awareness Program, a recently declassified government ran agency. The idea would be to launch two satellites destined for a near geosynchronous orbit. From that vantage point, gather data and intelligence in the geo belt and track both known and unknown objects there. They would also be able to detect possible threats and take action accordingly.

“Our decision to declassify this program was simple: We need to monitor what happens 22,000 miles above the Earth and we want to make sure that everyone knows we can do so.”

The X-37B is a harbinger for things yet to come. It has a flexibility that is new to space missions and provides new opportunities like we have never seen before. The craft can perform missions without a crew and be reused. It has an uncanny ability to collect and send data. The possibilities are endless when it comes to the matter of national security.

The only current setback to the program is the X-37B’s means of reaching space. It uses an Atlas 5 rocket. This is a very expensive means to reach space. Cheaper means of orbit must be found before these tiny space shuttles can be used in a feasible way. The Defense Advanced Research Projects Agency, or DARPA, is currently experimenting with a cheaper rocket that many hope will prove capable of replacing the Atlas 5 Rocket. This, combined with the X-37B, could prove to change National Defense as we know it.