The Airbus models have been widely developed based on the Boeing 737, and were created to challenge Boeing’s take on the market. The A380 was first flown on April 27, 2005 but did not make the commercial market until the October of 2007. Since then, it has become one of the favourites for aircrafts around the world. At the moment 324 firm orders have been made for the A380. 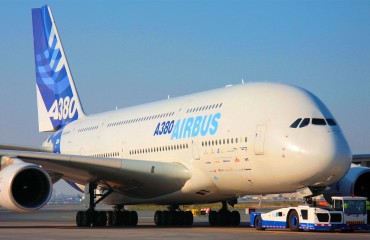 The Development of Airbus

Airbus formed in 1988 with Jean Roeder at the helm. It was the European’s answer to the Boeing success, and hoped to take on its rival at full force. After an initial attempt by McDonnell Douglas, Roeder was able to evaluate the company’s possibilities and find a way to help it become a well-known competitor for the American brand.

From 1990, the megaproject of operating at a 15 percent lower cost compared to the Boeing 747-400 was announced. Now all the company had to do was make it happen.

To do this, new technologies needed to be proposed, and its four partners—Deutsche Aeropace AG, Aerospatiale, British Aerospace and CASA—got to work. By 1992, the designs were created and the most competitive ones used for the designs.

Between 1997 and 2000, the operating costs needed to be reduced further. East Asia went into a major financial crisis, which was where most of the crafts were being sold to. The target was to reduce the operating costs by 15 to 20 percent compared to the Boeing 747-400 costs. This would affect the development of something already in the making. 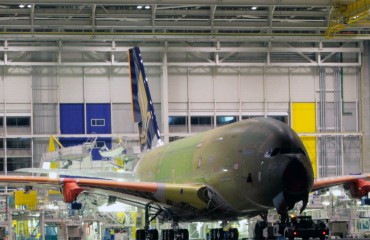 The Airbus A380 in production

The Pursuing of the Larger Aircraft

When Boeing and other companies were looking into the development of the Very Large Commercial Transport system, Airbus had other ideas. It was already working on its own large plane, that would be a development from the ones already out. This new design would be designated the A3XX, and used two A340 fuselages combined side by side. It was the largest jet the company had ever seen.

The new A3XX needed to be turned into the double-decker style if it would meet the reduction in operating costs. This would offer more space for passengers, while creating an aircraft that could fly further and faster. There was even the idea that gyms, restaurants and shops would be added to the airline, but this was never possible due to the finances needed. 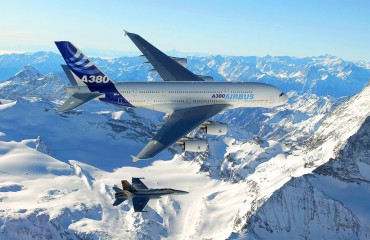 The A380 in flight with fighter jet at wing

The Development of the A380

By December 19, 2000, the A3XX was finally given a name. It became the A380, and 50 orders per placed from six of its launch customers. The plane was completely different to its previous aircrafts, including the A300 and A340. The main difference was the double-decker style.

It was given the number 8 because this is a lucky number of the Asians. It was seen that this craft would be the luckiest of all. However, it still took time to create the final designs and get the aircraft into production. Development costs were now at eleven billion Euros, which was up from the initial 8.8 billion Euros.

The production took place around various parts of Europe, including the UK, France, Spain and Germany. However, the size caused a problem for the development process. The parts were too big for the usual method of transportation, so the parts were moved with the A300-600ST Beluga craft, as well as all parts being sent to the Toulouse’s Jean-Luc Lagardere Plant.

After production, testing was required. Five different A380s were created with the aim for testing to make sure all kinks had been worked out. The first testing flight took place on January 18, 2005, using engines from Rolls-Royce and with six members of the crew. It landed almost four hours later with its testing pilot Jacques Rosay mentioning how the handling was like that of a bike.

Further testing was needed for speed and altitude. These tests took place at the end of 2005 and the start of 2006. On January 10, 2006, the transatlantic test was needed, which included stops at Jose Maria Cordova International Airport and El Dorado International Airport. It finally landed in Iqaluit, Nunavut, Canada on February 6, 2006 where it could undergo the cold-weather tests.

The only testing that failed was the wing strength certification test at first. Its limit was just 145 percent, which was five percent below the requirements. Just 30 kg was added, and the testing happened again. This time it worked, but further testing was required to make sure it gained all the certificates required to become a legal commercial plane.

It finally happened, and Singapore Airlines received the first Airbus A380 on October 15, 2007. Its first official commercial flight took place 10 days later from Singapore to Sydney airport, with seats auctioned at charity for the chance to be a part of history. While some seats were bought for $560, there were some bought for $100,380. 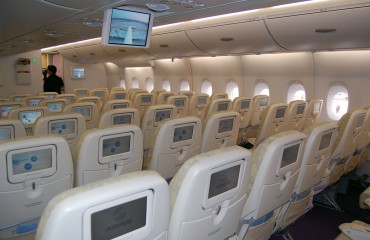 Suffering the Delays in Production

While it all seems like positive words, there were problems with the production and delivery. The first was due to the size, and the amount of wiring required. There were complexities that Airbus had not fully considered before creation, and that meant that delays in the production occurred. 98,000 wires with 40,000 connectors were needed in the end. This led to some configuration failure and meant the controls needed to be changed.

However, not everybody moved onto the new configurations. German and Spain were still working with the fourth versions of the plans, while France and Britain had moved onto the fifth version. When it came to putting them together, it was impossible because aluminium wires had been used instead of the copper.

This issue caused a six month delay, and meant that there would be 20 to 30 fewer deliveries made by 2009 than expected. That was not the end of the delays either. Another one took place that pushed the delivery now a year behind schedule from the initial date. This second delay caused the share price of EADS, the parent company, drop by 26 percent. Charles Champion, the programme manager of the A380 stepped down, along with Gustav Humbert, the CEO of Airbus, and Noel Forgeard, the CEO of EADS.

On October 3, 2006, a third delay was announced. This pushed the first delivery of the Airbus to 2007. In 2008, 13 deliveries would be maid and only 25 in 2009. The ability to reach 45 aircrafts a year would only happen from 2010 onwards, which would see earnings much less than expected. A further reduction to the numbers in 2008 and 2009were later announced, and then more for 2010. These were due to the availability of the engine by Rolls-Royce. 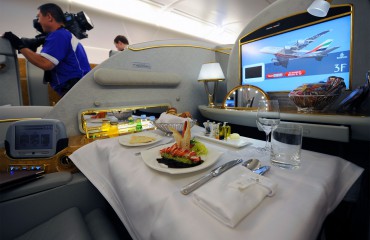 The Good News for Airbus Passengers

It all seemed like the company was going downhill, but Airbus pulled it back. It announced that no more than 25 would be delivered in 2011, but 26 were eventually delivered. It was the first time that the Airbus A380 developed more than predicted. By July 2012, three a month were created. However, it did mean that some changes to the initial designs were required.

The wait was worth it for Singapore Airlines, which saw the plane was performing much better than ever expected. 20 percent less fuel for each passenger was being burned compared to the Boeing 747-400. This saving could be passed onto passengers, since the airlines were going to make better profits.

Emirates was the next airline to receive one of the new Airbuses A380, and saw similar results. Qantas received the third on September 19, 2008 and by the end of the year 21,000 hours of flying had been completed with that one aircraft from that one company. That was 2,200 flights between Melbourne and LA. Singapore Airlines saw its one millionth Airbus passenger in the February of the next year, and announced 1.5 million passengers had flown by the May.

By July 2010, six million passengers had flown on an Airbus A380. The total flight time lasted 156,000 hours. There were 17,000 flights between 20 different international locations. The Airbus A380 reached its 100th plane delivered in March 2013 to Malaysia Airlines.

Unfortunately, there were issues after the release. Cracks started to show in the wing, and fixes needed to be made. All flights were checked by February 8, 2012 and the aircrafts were structurally sound once more. There were no thoughts that these cracks would cause problems for Airbus. The issues were minor damage and could be fixed relatively easily. However, fleets were grounded for a short period of time, and the airlines sought compensation from Airbus. Since 2014, all aircrafts have been made differently, so the cracks will not appear in the future. 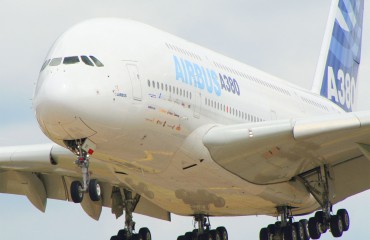 The Airbus A380 landing at the Farnborough air show in 2006

It is not just the airlines that favour the Airbus A380. Passengers have also expressed their enjoyment and comfort levels on the flights. It helps that the aircrafts have more than double the floor surface of other aircrafts of its size and calibre. The aircrafts can also carry as many as 853 passengers when the single economy class style plane is chosen, which increases passenger count and reduces prices. When the three-class configuration is opted for, 525 passengers can fly.

The cost and size also allows for more flights to be placed on. Passengers can get further and travel more, while remaining in comfort.