The search is still on for the fateful Flight 370, which disappeared on March 8, 2014. A number of countries have been involved in the mission to find anything that remains of the flight to help deliver answers to the families, but the searches are coming up empty so far. It has led to the discussion of whether the Bluefin-21 search, which is an unmanned submarine, should stop being used.

The Bluefin-21 has been searching the Indian Ocean since the start of the disappearance. There are parts of the Ocean that are too deep for anyone to go, which leaves unmanned options as the one viable ones in the hope that at least wreckage is found. Six missions have already been completed by the submarine, and so far all of them have come up empty. According to the Joint Agency Coordination Centre on April 19, the seventh mission was underway.

What could possibly make the new search any different? The main hope was that the narrower search would make it easier to find something. It would mean a more in-depth search of areas. However, there is still the likelihood that the search is taking place in the wrong place. The difference is that these specific, smaller areas are parts of the ocean never tried before.

The difference with the seventh voyage is that the submarine will get deeper than ever before. It is possible for the Malaysia Airlines flight to have dropped as much as 604 feet below the unmanned submarine’s limit of 14,800 feet. With that in mind, the sub needed to be reprogrammed to allow for a deeper and more effective search.

There are risks of damage, but these risks are more than acceptable considering the need to find the flight. Of course, if the flight is found at these depths, it would be almost impossible to raise it up. It just goes to show that even the technology of today is not perfect, and improvements are needed if the raising of crashed and sunken vessels and aircrafts is every to be a realistic possibility. Even if Flight 350 cannot be brought home, just knowing what has happened will be enough for many families. People want closure, and just finding the wreckage almost 16,000 feet under water will bring that.

Bluefin-21 did reach a record depth on its fourth voyage. It went 15,404 feet deep, but has never been to the absolute bottom of the Indian Ocean. There was a constant need for monitoring the equipment while the submarine was at such a depth. 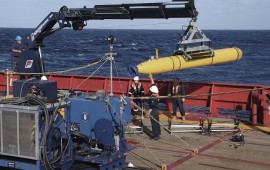 The search is already considered to be the most expensive in aviation history. It is already at double the cost for the search for the Air France flight in 2009 at the same point in search time. However, it is worth it to get the answers. The cost is not stopping countries from adding more money and more aircrafts or ships into the mix. However, if the Bluefin-21 does not find any results this time, it could be pulled from the mission.

For those wondering about what it means for the overall search, it does not mean that it will come to an end. It just means that this part of the search will come to an end. There is still the possibility of expanding the scope and chances that technology will make it possible to find the missing aircraft in the years to come.

The area currently under observation was where the last pings from the black box were heard. That black box only had a battery life of 30 days, and is expected to have completely run out by now. Without hearing more pings, it will be difficult to determine whether the Bluefin-21 is definitely in the right spot or not. It is just guess work, and if nothing comes from the seventh mission the risk of further damage would not necessarily be worth it.

Those in charge of the search will need to consider a different approach if the unmanned submarine does not find anything. There are currently 12 ships and 11 planes involved in the area, along with the underwater searches. However, they cannot remain in the same spot the whole time while returning nothing of value. It does not justify the cost of the mission, which will worry a number of people.

For now, the underwater search is the main priority. The officials will then consider the other approaches available, and discuss which method to focus on afterwards. While doing that, there is always the chance that further modifications can be made to the Bluefin-21 to help it reach further depths in the event the plane is on the deepest part of the Indian Ocean.