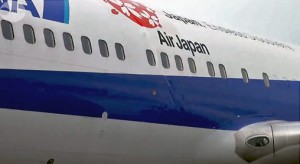 Damage on the side of the body of the aircraft

After briefly touching down on runway 16R at Narita Airport, the aircraft bounced off and touched down heavily for the second time, nose gear first. The aircraft eventually settled on the runway, rolled out and taxied to the apron.

The aircraft, registration JA610A, was flying from Beijing to Tokyo Narita. Although the aircraft was significantly damaged, none of the 193 people on board were injured.

An ANA representative said, “The flight had a rough landing when it landed at Narita’s runway. After all passengers and crew were off, our mechanic checked the aircraft and found the outer panel of the aircraft’s fore side of the body had been damaged.”

The Japan Transport Safety Board is currently investigating the cause of the accident. There were gusty winds at the time of the accident, but it not yet known if the weather conditions caused the hard landing.

ANA is one of the main airlines in Japan and it operates services to about 50 destinations in Japan and approximately 30 international routes. ANA also runs several subsidiary passenger carriers, including ANA Wings, a regional airline, and Air Japan, a charter carrier. ANA also owns several small carriers, namely Air Do, a budget carrier, and several low-cost carrier joint ventures.