Air India, the flag carrier airline of India, has announced that it wants Boeing to make a compensation payment for the delay in delivery of 787 Dreamliners. Air India has stated that it will not accept delivery of any Boeing 787 aircraft until Boeing settles the compensation claim. 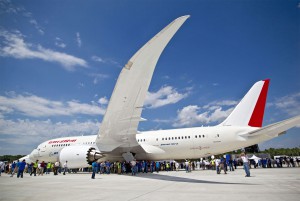 Air India ordered 27 787s, and the first aircraft was supposed to be delivered in September 2008. However, there have been delays in the 787 program due to a number of factors including labour problem at Boeing, and the delivery of the Dreamliners was delayed.

The first of the 27 787s ordered by the state-owned carrier is ready for delivery – Air India was scheduled to take delivery of this aircraft in early June 2012. Once the compensation claim discussions are finalized, Air India will accept the delivery of the first aircraft.

The airline’s board held a meeting during which the decision to seek compensation was made, and the board’s plan has been sent to the Indian civil aviation ministry for approval.

The compensation amount that Air India is seeking has not been disclosed.

Air India is cash-strapped. The airline has reportedly invited financial institutions and banks to assist raise loans of up to $500 million to help the airline take delivery of first few 787 Dreamliners by December 2012.

Meanwhile, the airline has had labour trouble in recent weeks, which caused major disruptions on its international flights. All its pilots went on strike, and Air India subsequently dismissed 101 pilots. The pilots were protesting the carrier’s decision not to train them for the 787 aircraft. The airline has had to reduce its international flights due to the ongoing labour dispute.