Air Finland ceased operations, cancelled all flights, and filed for bankruptcy on 26 June 2012. 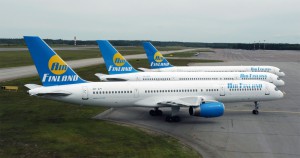 The airline was founded in 2002 and operated from its head office and base at Helsinki Airport in Vantaa, Finland. The airline operated scheduled and chartered flights to popular holiday destinations such as Alicante, Antalya, Malaga, Madeira, Crete, Rhodes, Dubai, Las Palmas and Tenerife. The airline offered holiday package tours.

Announcing the airline’s collapse in an official statement, Mika Helenius, CEO of Air Finland, said, “In this challenging situation, we were unable to obtain additional financing…We are deeply sorry for this development and the inconvenience to customers.”

At the time of its collapse, Air Finland had thousands of customers at holiday resorts. Homeward flights for these customers are currently being organized in association with the Consumer Agency.

According to Helenius, the company has folded dues to high fuel prices and “overcapacity in the market”.

The company had about 200 employees.

Airbus Retrofit Wing-Fix Solution to the A380 Expected in 2014